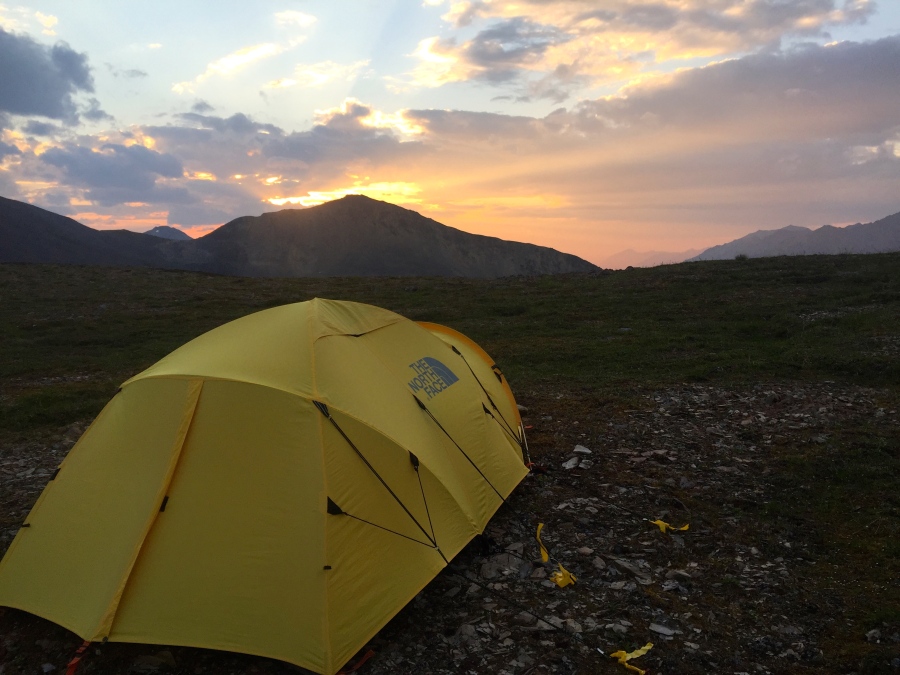 My field season this year consisted of being a field assistant for two months of fly-camp mapping in the Selwyn Mountains, located in SE Yukon. Geologically speaking, this area is part of the Laurentian platform, which is the gap between the Cordillera and Ancient Laurentia (aka the Canadian Shield). It can be called a shelf environment, with evidence of a fan environment into shallow carbonates to deep water shales. This all was in part of the development of the Selwyn Basin, which spans from the SE into central Yukon. Generally speaking it is filled with basinal sediments, volcanics, and major plutonic bodies.

One of the best go-to papers prepping for the field was the GSC memoir 428: Gordey & Anderson’s Evolution of the Northern Cordilleran miogeocline, Nahanni map area (1051), Yukon and Northwest Territories, 1993.

Listed below are the major units that I was involved with in the field this summer:

Structurally speaking there was regional SW-directed thrusting, which was displayed as the only preserved foliation, and NW/SE folding.

The first month was spent on the eastern side of the Hyland Valley, and so I was mapping through all of the listed units. We had a camp right along the YK/NWT border, where we did see

the Narchilla Fm equivalent, the Vampire Fm, that includes coarser grained, grey sandstones. The first few camps were spent mostly in Narchilla, Gull Lake and some Rabbitkettle. We were mostly covering ground to fill gaps in the map and were located in the south of the map area. Over time we moved further north, covering a few camps of characterizing more stratigraphic units for the Yusezyu and then into Rabbitkettle land! We spent a total of three camps collecting loads of structural measurements in fairly monotonous rock for the map coverage. The hiking was also pretty intense, considering we were in the Northern Rockies.

Geologically speaking, one of the interesting features were basaltic dykes that we saw minimally in the Yusezyu, but mostly intruding the Rabbitkettle, that were xenolith-bearing! More to come about these xenoliths perhaps, stay tuned with the YGS.

We also walked a few properties that happened to be located within our mapping area, one of those being the Justin property, most recently worked on by TerraLogic. This is a porphyry style mineralization with an underlying intruding pluton that has flushed the surrounding Yusezyu with fluids and created significant Au/Cu economic potential. It also creates some nice scenary!

Then we hopped over to the western side of the valley, and into metamorphic wonderland. Best to consult David P. Moynihan’s 2012 paper: A preliminary assessment of low pressure, amphibolite-facies metamorphism in the upper Hyland River area (NTS 105H), southeast Yukon. This is an area with the same sedimentary rocks we were seeing on the east, however affected by a large contact aureole due to the surrounding mid-Cretaceous intrusions. We were able to walk through the isograd zones along the ridges: sillimanite –> andalusite –> staurolite –> cordierite. Probably one of the most interesting aspects was the presence of pink andalusite in the rocks, seen largely in the surrounding qtz veins but also in the pelites themselves!

Another interesting feature was the presence of skarn along the boundaries of the semipelites and psammites with marble. This would be the same idea, but on a larger scale, at the nearby Cantung tungsten mine just across the border. In fact there were old exploration properties in the area that were looking for just that. Not economic, but the large euhedral garnets and smaller bright green chrome diopside on c.g crystalline marble makes for a great addition to ones rock collection!

We didn’t spend too much time in the plutonic rocks, other than to distinguish small petrological differences in the various intrusions to make a better map. We did come across one outcrop much closer to the Mount Billings batholith that was of gneissic affinity! Some very cool generations of pegmatites, a mystery garnetite, and some boulders of amphibolite that we could not find in outcrop. We were also tracing a mystery marble unit from here back across the valley into the east, that varied in thickness and purity. At this point for our last few camps we hopped back over, but further to the south, to continue the search and begin an area that will continue to be mapped to the south and east in subsequent years. There is another nearby batholith that will perhaps show some metamorphosed pelites and limestone of the Narchilla and Rabbitkettle. Structurally speaking, there is hope to find preserved older fabrics on a microscopic level, which could tell the story before the major thrusting event. This is a problem with the dominantly sedimentary rocks of the area, because they are so malleable and will not hold several generations of fabrics well. I won’t speak to the faults in the area at all, because you will simply have to keep an eye out for Moynihan’s paper and preliminary map!

This summer I was able to further advance my knowledge of sedimentary rocks in the field, which I have less experience with; become familiar with more structural indicators, such as clasts indicating shear sense; understand and be familiar with isograds within a contact aureole; piece together larger scale potential fault systems; understand and plan fly camps; settle the debate (somewhat) between classifying an intrusion as phaneritic or aphanitic. Thats a wrap!

Besides from the ones bolded in the above text, listed here are some more great papers: